I got my infrared filter in the mail, and found out I mistakenly got the wrong size! I’m a little embarrassed I didn’t double check my order, but that’s okay, I ordered an adapter ring.

I’ve been admiring infrared photography for the past few months, and I’m super excited to try it out for myself. Here are some beautiful examples: http://www.1stwebdesigner.com/inspiration/40-examples-infrared-photography/

I’m really excited to have some time over spring break to experiment with some ideas I have. I’m especially looking forward to experimenting with infrared because I’m going to do some landscape and still life work, which is something I don’t do on a regular basis. I do love a challenge, though!

I wonder what the infrared will look like with snow everywhere… Interesting prospect!

Yesterday, I dived into a project that I’ve been putting off for quite a while. It’s a really heavy subject and I was nervous as to what response I might get.

My project, Battle Scars, is a photographic series centered around self-harm. Self-harm is a subject that is not widely spoken about, yet one in five females and one in seven males have engaged in some form of self-harm type behavior. This is an issue that I am very passionate about, and it is an issue that I want to spread knowledge about. There are a lot of misconceptions about self-harm, and I want to play my part in clearing these misconceptions out of the way.

I was originally inspired by the photographer Jefferey Wolin, who did a series called “Written in Memory”, where he photographed Holocaust survivors and he wrote their stories on the prints. I’m doing something similar, but with some changes that I feel are important.

I’ll be photographing scars of people who wish to participate in my project. Their identities will be known only to me, as their faces will not be shown. After I get the images printed, I will then hand the print over to the person I photographed and have them write their “Battle Scar Story” on the print themselves. The goal is to put into perspective what self-harm is for those who may not have any empathy or understanding.

I’ve gotten a lot of messages since I sent out the call for subjects, and I’m humbled and shocked. I didn’t think I was going to get such a large response, and some of the people I’ve heard from have surprised me. I can tell that this project is going to teach me a lot about self-harm, seeing as it’s been only 24 hours since I’ve started and this project is already weighing heavily on my heart.

I can’t wait to see this through.

I got my Minolta Weathermatic!

This baby takes 110 film to snap underwater/rainy/snowy photographs. Needless to say, I am super excited. Can it snow or rain already (or can it be June so I can go try it out underwater?)

Seriously though. This is gonna be awesome.

I was doing some file organizing on my computer (it’s a mess- I can’t find anything without having to type it in the search box…) and I came across some scans I did a while back of some old family photos. 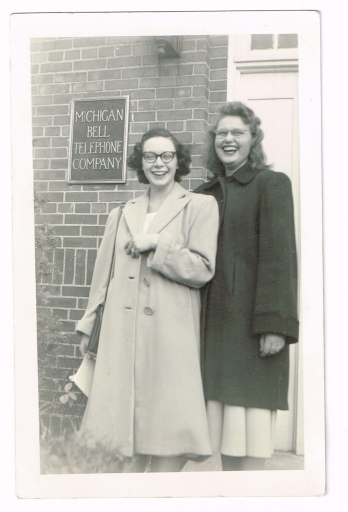 The top image is a of my grandmother when she was in high school (she looks far more happy about being in school than I have ever been in my life).

The middle image is a picture of my grandfather when we first joined the navy (LOOK AT THOSE EARS! WOW!)

The bottom image is my grandmother (left, with the super fashionable glasses) and a friend.

I just love these old pictures of them! It’s hard to imagine what they were like when they were younger because, obviously, I’ve only known them with their wrinkles. I especially love that bottom image of my grandmother- she’s so gorgeous and that smile is the most genuine smile I have ever seen.

I just never understood why people throw their old photos away. I find so many albums at thrift stores and antique stores, and I just want to take them home with me as if to say, “Hey! Don’t you worry! I’ll adopt you into my family!”

Really though, those EARS.

The BoxHeads will be returning this week!

I’m planning a shoot for this upcoming Wednesday, so check the BoxHead blog, which can be found here.

I recently discovered a blog called “I Still Shoot Film”, and I’ve been going through the archives for about three days now, drooling… I had to put a plastic bag over my keyboard to save it (not really but it’s an amazing blog!)

It’s super inspiring and it really makes you want to go out and shoot film! I learned a lot about the film medium from the author of the blog so far, so it’s definitely worth checking out to see what others are doing with film, to get some ideas, and to even learn a few things.

You can check it out here.