In November, I went to NYC, and brought my Polaroid camera with me, loaded with the monochromatic Cyan 600 film by Impossible Project. I’ve also been hoarding the magenta version of this film, for a fair, for some reason. No idea why, just one of those weird artist vision things.

So this weekend, I was going to a fair, and was like YES TIME TO BREAK OUT THE MAGENTA FILM YAY! But, I discovered I still had a shot left of the cyan… So this cute little diptych exists now:

It’s actually totally coincidental that they are cotton candy colored. Or maybe my subconscious planned it along? Who knows anymore. You’re reading a blog by a girl who encourages her friend to push a shopping cart with a hobby horse in it around the neighborhood and puts her boyfriend in a fish tank. My track record either says I’m insane, or I’m awesome. Let’s go with the latter.

My friends Allie (who I talk about a lot, as she has always modeled for me,) and Dom are the cutest. The fair we were at was very small and kinda dull, so I was like “pic opportunities where are youu?” Then I realized I had a beautiful couple at my disposal.

“Allie go stand by him.”

Since Impossible Project film takes about 45 minutes to develop, Allie, Dom, and Mitchell (my boyfriend I also never shut up about,) were surprised that the film was cyan and magenta. Mitchell was so surprised he took my camera and took a picture of me.

I’m not a fan of being photographed. I tried to hide behind my new stuffed animal, Stumpy (courtesy of Mitchell popping a balloon with a dart,) but he was too tiny. But, my expression is priceless, so here:

Irrelevant, but his name is stumpy because his face is squashed in and his legs are two different sizes. Adorbz.

So, yeah. I have a couple more shots of the magenta, so we’ll see what I do with that. Maybe it’ll sit in my camera for 7 months like the cyan film did (whoopsies?)

It has been five months since I’ve done a roll of double exposures on my Minolta X700. More than that, maybe, I don’t know. I’ve lost count. It was probably for the best, because for a while there I was double-exposure happy. But, I have come off my hiatus with a developed roll that I started at the end of March in Dayton, OH and finished today here in Michigan.

As I mentioned before, I started this roll in Dayton, OH. The second picture is of my friend Rachel, in this weird room in our hotel parking garage. The hotel we were in was extra shady, mostly because of this parking garage. After the sixth level, there were no lights and there were tarps on the ceiling, and on the second floor there was this room. It had no explanation, just a desk and a single, creepy, light bulb. So, Rachel posed all stoic-like for me.

The next three images are from when I moved out of my dorm about two weeks ago. My room was empty, and I figured I might as well take advantage of it. My favorite is the red-hued image (that’s me on the floor with my fish, Charlemagne.) I framed everything and my boyfriend pressed the shutter. Team work!

The last three are from this past weekend, when I went with my niece and nephews to a carnival near our house. We had to leave early because of violence (long story, people are dumb,) and ended up at a park by the end of the evening.

I have one image that I scanned in straight from film, and that’s because I was looking over my prints and realized that one of the images I took wasn’t printed by the lab. So, I scanned it in myself, and took some liberties with the colors. 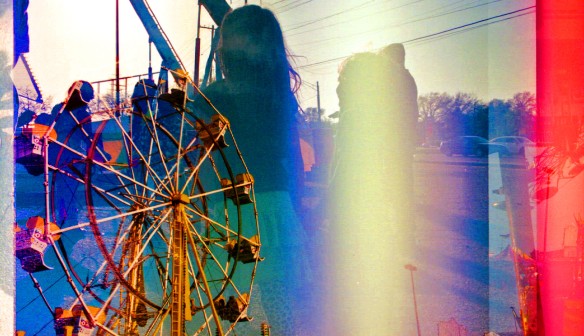 That’s my niece and nephew, waiting in-line for the pirate ship ride, with the ferris wheel superimposed. It’s my favorite because if you look closely, you can see that they are holding hands.

I also took a couple non-double exposures that I think have their merits, so here they are.

Those are my nephews, and that is the pirate ride. I think the light leak that appeared over the bottom half of the image was pretty lucky. It makes it look misty, and hey, pirate ships and mist? They go well together.

Since I like doing double exposures so much, I think I might so a double-exposure challenge for you guys. But, more on that later.