I’ve had my Voigtlander V6 for almost a year now, and I’ve just gotten my fourth roll of film from it developed. I’ve been pleased with every roll I’ve shot on this pretty old thing. When I went to pick up my photos from the lab, I was told “You might want to look at these, they have black specks–”

That’s why I love this camera so much. It’s an antique, and it gives that look to my photos. LOVE LOVE LOVE.

But enough of that. I took it out for Memorial Day weekend, which was filled with all sorts of adventures.

Near Mitchell’s house in the middle of nowhere, there is the decrepit house. It gives him the heebie jeebies, but I think it’s awesome. The others are from my adventures at the country fair, Wayne State University, and my grandfather’s Memorial Day picnic.

That dollhouse photograph is easily one of my most favorite photographs ever. It’s at my grandpa’s house, and when I was little I played with it every time I was over there. For hours. The tiny dolls that went with it went through drama that would make today’s soap operas pale in comparison. I guess you could say I’ve always been creative?

So, there’s that. Do you have an old camera that you love to shoot with?

I mentioned in my post about my trip to Stratford-upon-Avon that I bought a Twin Lens Reflex camera. It’s a Voigtlander Brillant v6, and it took me two hours and a migraine to figure out how to use it. I bought film for it, I filled the film, I got the roll developed, and now I have the scans! 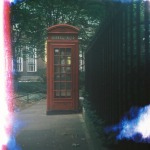 The fact that photographs actually turned out of this thing is a thrill for me. One, it’s a hella old camera so I was worried photos wouldn’t even turn out at all. Two, it’s the most complicated camera I have ever used, so there was that. I’m really diggin’ the hazy quality of the images, and the light leaks in the last two pictures are awesome. I love those.

For some reason I thought it would be a good idea to take it out for night photography, and I surprisingly got a few good images from that spontaneous and not-well-thought-out event. I guess learning how to meter without a light meter is really paying off, since I’m getting good enough to guess exposures at night time with an ancient camera. Kudos to my professors and friends and Google who taught me all the things.

I’m taking it out for a spin when I go to Paris next weekend. I’m doing a photo shoot at Versailles with a few girls from my program, so that should be fun. The softness and the colors I have my models wearing and the location will all fit together nicely.

But, that’s pretty much it for now. If you shoot medium format film, leave a link in the comments to your work- I want to see!